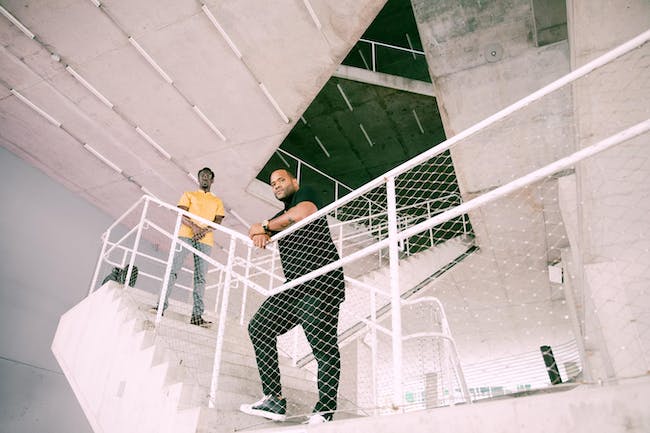 “We had a wall that we wrote stuff on,” says Wil Baptiste, describing the process that led to Black Violin’s new album, Take the Stairs. “We had all the ideas about what story we were going to convey. And it kept coming back to the idea of hope—songs that spoke about going against the grain, carrying through struggle, being optimistic. We wanted to say, ‘it’s tough now, but hang in there.’ ”

Much like the ways their instruments interact on stage, Wil’s creative collaborator Kev Marcus echoes this theme, and then expands it. “Hope is the thread that keeps this thing together, it’s the heartbeat of this album,” he says. “But then a lot of tentacles went different ways—the song ‘Impossible is Possible’ is about challenging people. So it went different directions from just being hopeful, we took it a little further.”

The first single released ahead of Take the Stairs was the timely and inspiring “Dreamer,” with a message that was immediately embraced by several commercial campaigns. “This is the day when I go all the way/I make it my own/Here’s to the dreamers,” sings Wil. “That just really hit home,” says Kev. “It got to the heart of what we’re about.”

For more than a dozen years, Black Violin has been all about taking things further, exceeding expectations, challenging conventions. The classical-meets-hip-hop duo has steadily built a devoted following and a diverse touring base, while occupying a musical lane that’s entirely its own.

“When you do something you love, it’s not difficult,” says Wil. “I’m just going on stage and being who I am. When people want to listen, when you touch them and make them want to keep fighting—to see that spreading out to more people, it’s about way more than just the music.”

Indeed, Black Violin’s work extends far beyond the stage, reaching deep into urban communities with numerous free performances for students and hands-on engagement with youth symphonies and community centers. Through the TurnAround Arts program, Wil and Kev connect with more than 100,000 students throughout the year, mostly at low-income and Title 1 schools, and adopted Bethune Elementary, in Florida’s Broward County (near where they grew up) to initiate an ongoing mentorship program.

Wil expresses the idea that, no matter how unique Black Violin’s music may be, it is ultimately more than just a creative enterprise. “It’s really a movement,” he says, “an organism that’s its own thing and really feels necessary.”

With Take the Stairs, Black Violin are striving to take their message of unity and inclusiveness even further, moving Wil’s vocals further forward while continuing to explore the possibilities of merging classical virtuosity and structure with modern beats and tones. “We wanted something different, beautiful songs that could go to radio,” says Wil. “I sing every night, so that’s nothing new, but we felt like we’ve never had that one song that can help elevate us to the next level. This album has records like ‘One Step’ that can appeal to everybody, so we lean a bit more on that, but we still had to keep that quintessential Black Violin sound.”

“When you’re a creative musician,” adds Kev, “when you press record, you let the music lead you. The vocals have definitely stepped up each time—Wil becomes more of a vocalist on each album and finds his voice a little more. It solidifies us as artists, too, trying to make a bigger stamp.”

The members of Black Violin first met in Ft. Lauderdale, and played together in the orchestra at the Dillard High School of the Performing Arts. (Baptiste originally wanted to play saxophone in the band, but the orchestra teacher got him assigned to his class by winning a golf bet with the band instructor.) Classically trained by day, they faithfully put on their headphones and listened to the hottest rap records each night. They went to different colleges—Marcus attended Florida International University and Wil B went to Florida State—but then reconvened, moved into an apartment together, and started trying to produce other musicians.

They developed an act covering hip-hop songs on their violins, which became popular in local clubs. Two years after sending in a tape to Showtime at the Apollo, they were invited to appear on the show—which they won, and kept winning.

They were approached by the manager of Alicia Keys, who asked them to perform with the singer on the Billboard Awards. Other offers followed—they toured with Mike Shinoda of Linkin Park, opened for the Wu-Tang Clan, scored an episode of CSI: New York. Individually and together, Wil and Kev have worked with everyone from Kanye West to Tom Petty, Lupe Fiasco to Aerosmith. All the while, Black Violin continued touring non-stop (playing as many as 200 shows a year) and released two independent, self-financed albums before putting out the acclaimed Stereotypes in 2016.

The 13 tracks on Take the Stairs reveal the range and diversity of their influences and vocabulary, from “Showoff” (which Wil calls a “classic instrumental”) to the Curtis Mayfield-inspired “Lost in the Garden.” One favorite is “A Way Home”—“That record should be the Olympics theme song!,” says Wil. “I can see us going from country to country, engaging with different cultures. I played it for my wife and she started crying—that’s a special song right there.”

Kev notes that “inspiration can come from anywhere—the cable guy played me an Ethiopian tune when he was fixing my modem.” He points to the track “Al Green” as an example of the journey that Black Violin songs can take. “I had a Dvorak piece called ‘Slavonic Dancers’ and I was into that vibe,” he says. “I played it for Salaam Remi [who has worked with the likes of Nas, Amy Winehouse, and the Fugees, and co-produced and is featured on several Take the Stairs tracks] and he said ‘That has a cool bounce to it—let’s funk out that groove and put an Al Green-style bass line on it. We both played violas over that, which I’d never heard. So that one is funk mixed with a Czech Slavonic dance, with an Al Green sample and viola solos.”

The members of Black Violin both point to their own personal evolution and maturity, and to the ways this growth came out on Take the Stairs. “This time, every I is dotted and T is crossed,” says Kev. “There was a rush to the last album, a deadline we had to hit after we signed our record deal. This one we funded and produced ourselves, then shopped the record. So it was a really well-thought out and more deliberate process; we had more time to live with everything and feel comfortable with it.”

Wil says that Black Violin isn’t always explicit with its message, but that they don’t have to be—that the creation of an audience that is multi-generational, ethnically and economically diverse, is a powerful statement of its own. “The stereotypes are always there, embedded so deep in our culture,” he says. “Just by nature of our existence—the Idea that these black guys who could be football or basketball players are playing the violin—we challenge those ideas. It’s a unique thing that brings people together who aren’t usually in the same room, and in the current climate, it’s good to bring people together.”

It’s all wrapped up in the name of the album. “For sixteen years, we’ve slowly been taking the stairs,” says Kev. “It’s a gradual kind of snowball where now we have control, we can tour in Alaska—we took the hard way for so many years, now we can look back and see what we’ve learned.

“You’ve got to work hard to get what you want. But you shouldn’t be looking for the easy way, anyway, because the hard way is where the real lessons are.”