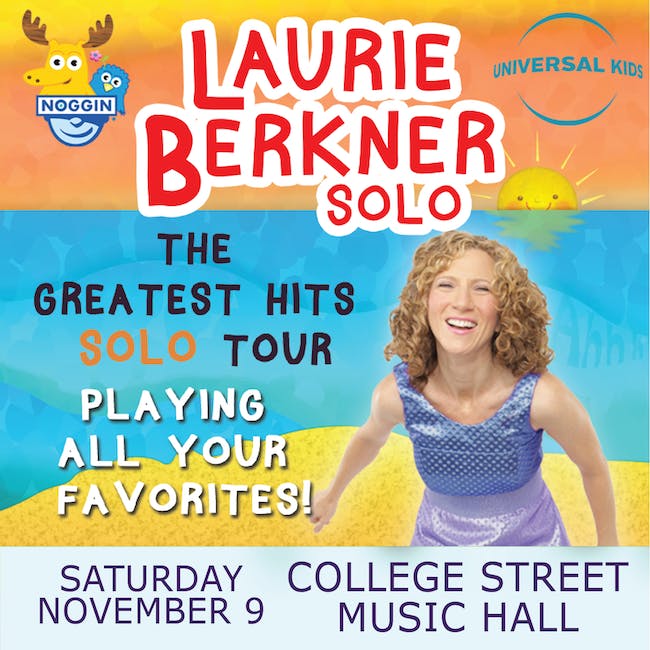 Laurie Berkner has been a professional musician since 1992, but her success as a children’s recording artist was a surprise to her. “It was so unexpected,” says Laurie. “I’d been performing in rock bands and struggling to write original music. Writing music for kids has not been a struggle at all. The more I started working on material for children, the more I realized that it opened up creativity in me that I never knew I had.”

These days critics widely acknowledge Laurie’s major contribution toward launching what is now dubbed the progressive “kindie rock” movement – i.e. less saccharine, more rocking music that is not dumbed down for children. But it wasn’t simply an enormous amount of talent that helped create an entire genre and skyrocketed Laurie to her current position as “the queen of kids’ music” (People magazine). It was an ability to gain parents’ enthusiasm for the songs as well. According to Laurie, “When I’m writing a song, I’m thinking about whether the kids will like it and whether I’m going to connect to them through it. I’m also thinking about whether I want to sing it over and over again, so I guess that’s the part that connects with adults. ‘Old MacDonald Had a Farm’ is a great song for kids, but I couldn’t sing it 100 times!”

While Laurie never planned to be a children’s performer, looking back on her career it almost seems inevitable. While growing up in Princeton, New Jersey, Laurie was always involved in music, whether singing in choirs, playing in bands, or performing in musical theater. In high school and throughout college (at Rutgers University), she toured Europe with several choirs and orchestras as a soloist and guitarist. After graduation, Laurie spent several years as a children’s music specialist at New York area preschool and day care centers. Working with children became the perfect creative outlet for Laurie to express her talents and create something that, she says, “has turned out to be incredibly rewarding.”

The first recording artist ever to perform in music videos on Nick Jr., Laurie was featured in nearly all the episodes of the channel’s Jack’s Big Music Show. Laurie recently created her own Audible Original Series titled Laurie Berkner’s Song and Story Kitchen. Her music videos appear regularly on NBCUniversal’s Sprout House and she is a familiar radio presence on SiriusXM’s Kids Place Live. She maintains a busy touring schedule and has performed at Lincoln Center, Carnegie Hall, and the White House, among many prestigious venues.

Laurie has authored three picture books for Simon & Schuster Books for Young Readers, each based on one of her beloved songs: We Are the Dinosaurs, Pillowland, and Monster Boogie. Laurie previously authored four books based on her songs, including two Barnes & Noble NOOK Kids™ e-books.

Venturing into the world of the theater Laurie has written music and lyrics for three Off-Broadway children’s musicals produced by New York City Children’s Theater: Wanda’s Monster (2013), The Amazing Adventures of Harvey and the Princess (2014), and Interstellar Cinderella (2017).

Laurie continues to be inspired by her audience. “I want to create songs that matter for children,” she says. “I was singing once and saw a four-year-old girl shut her eyes and start swaying to the music. I thought, ‘That’s the reason I got into music.’ It keeps me wanting to do more.”

When she’s not making music, Laurie enjoys visiting the farmers’ market for organic produce, knitting, biking and spending time with her husband, Brian, and their daughter, Lucy. They live in New York City.