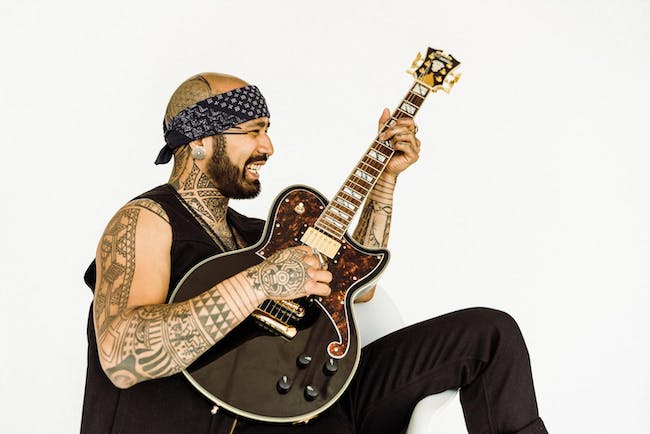 Nahko and Medicine for the People

This event is General Admission Standing Room on the Floor. There will be limited first-come, first-served seating available in the back of the room, but seating is not guaranteed.

Each pair of tickets purchased online for the upcoming Nahko And Medicine For The People 2019 tour comes with either a physical or digital copy of the upcoming new album 'Take Your Power Back', when it is released. Approximately three weeks before your show, you will receive an additional email with instructions on how to redeem your album. US/CAN purchasers only. Not valid for Fan to Fan Resale.

“As storytellers, we turn the experience into something shared. We are taking to that great road again to bring our medicine to you. Naming this tour the 'Take Your Power Back Tour' felt entirely appropriate given the state of the planet and all Her creatures great and small. Women of wonder and potent poetry will join us on that fall road. Ayla Nereo brings her big medicine to half of this tour and Nattali Rize brings her big power to the other half. We can already feel the high vibe container, a congregation cultivating a safe space for transmission and reconciliation. Tears and laughter. Movement and medicine. Arrive at our gathering this fall with whatever shape your heart is in. Full, broken, in pieces, strong, hopeful, hurting, overflowing, all of it. We’ll help best we can. It’s us. Together. We’ll see you there, familia.” - Nahko

Nahko And Medicine For The People continue to gather dedicated members of their global Medicine Tribe of likeminded fans as they spread their positive and powerful musical message around the nation on their Take Your Power Back headline tour this fall. Fans and critics alike praise the group's worldly blend of rock, hip-hop, and alt-folk with OC Weekly calling the group "empowering" and "powerful”, while The Huffington Post compared Nahko to Bob Marley and called him a "musical prophet". The October 2017 album ‘My Name is Bear’ premiered at #1 on iTunes and debuted on a number of Billboard charts, and the headline tour in support of the album boasted multiple sold-out dates throughout the USA and Europe. ‘My Name Is Bear’ is a 16-track collection that reflects the soul, authenticity, and spirit that Nahko And Medicine For The People’s Medicine Tribe has come to know and love. Their previous album ‘HOKA’, which was released in June 2016, sold over 8,000 units in its first week in the U.S. and debuted at #6 on the Billboard Alternative Albums Chart. The album went on to win Record of the Year at the Native American Music Awards later that year.

Nahko And Medicine For The People are firm believers in using music as a tool of empowerment to protect and preserve all of creation. They aim to inspire others to take a deeper role in protecting and preserving our planet, people, and the spirit in all of creation.

The band is thrilled to release new music in 2019 and continue their world tour this summer in advance of the Take Your Power Back fall headline tour, including stops at Bonnaroo, Glastonbury, Woodstock 50, Lockin’ Music Festival and more!

So sings the luminous singer, songwriter, poet and producer Ayla Nereo, who is spearheading a revolution within the new-folk and indie-electronic music communities, opening the hearts and minds of devoted audiences around the world with the clarion call of her powerful voice.

Every live performance with Ayla is its own inspired journey. Sometimes alone with an acoustic guitar and minimalist electronic accompaniment, other times armed with an array of loop-pedals and bandmates, Nereo is known for building layers upon layers of intricate vocal melodies into fierce, sweeping harmonies, weaving in syncopated threads of guitar, kalimba, piano, percussion, strings, celtic beats, even hip-hop wordplay.

Her timeless, genre-melding lyrical imagery is both authentic and anthemic. Mantras of hope and self-acceptance, odes to nature, healing and of course, love, her songs call us to listen deeper, to connect to ourselves, each other and the planet. Often compared vocally and lyrically to Joni Mitchell, her arrangements and stage presence are something more modern and fierce, a realness, energy and innocence closer to Aurora or Imogen Heap.

Raised with a spirit of wonder and a connection to magic, Nereo was "unschooled" by her music-loving parents in northwest Sonoma County, California until the age of 13. "My imagination was kept safely intact," Nereo says. Exposed to a wide variety of musical influences -- from Cat Stevens, Neil Young and Joni Mitchell to ABBA to Beethoven and Tchaikovsky, at age 9 she was already a proficient Suzuki method pianist and taught herself classical songs on piano by ear.

"I fantasized about making songs and singing," Nereo says, "but I had a strange paranoia I was tone-deaf, so I wrote it off as impossible, and stuck to dancing, filmmaking, and writing poetry and stories."

The nature-based experiential learning of her youth fostered her childlike wonder and creativity, but when she entered the school system, the former free-spirit found herself grappling with the stress of grades, body image issues and mental health. Ultimately that led her to study psychology at Stanford, from which she graduated with her BA in 2006.

After 8 years in the standard school system, Nereo had almost forgotten about her creative pursuits. Then she discovered Bob Dylan, listened to his lyrics "for hours and hours on end," and her poetry and songwriting were awoken. "Songs began to simply pour through," she says.

Terrified of singing for much of her life, "I had such a journey through fear and self-doubt about being seen and heard by others," says Nereo, "I know now this is a very deep pattern in most women, that fear of being hurt or killed for being powerful, because of the incredible trauma in our history when millions of women were burned for being healers and leaders." Luckily, those around her kept begging her to sing. "So I kept singing," she explains. "My voice emerged from hiding ... and slowly the fear was released."

"Many of my songs are about trusting ourselves, allowing our innate power and beaming brightness to shine through," Nereo explains. Her songs also touch deeply on human beings' connection to -- and sometimes tragic disconnection from -- the natural world. A devoted ally of the planet, Nereo considers herself an earth guardian and "voice for the voiceless -- trees, animals and creatures, children, women who are silenced, the elements, and the unseen realms." Her most recent album, The Code of the Flowers, came in a vision, and is a spellbinding dedication to the plants and waters of the earth.

"I'm here to receive these songs and share them into the world," she says, "to be the vehicle for them to ignite the hope, wonder and fierce love needed to evolve in these times."

Ayla collaborates in music and life with her partner of 5 years, electronic music composer David Sugalski, aka The Polish Ambassador. They live off-grid on land in the mountains of northwest California, with their dog and two cats. She is currently working on two music videos and a new full-length album.

"A poet, musician, visionary and mystic, Ayla Nereo is an otherworldly artist who shares the fruits of her soul." ~ The Huffington Post

"[Ayla's] relationship with the earth is imprinted in her music ... thickly layered tracks where expansive and intriguing instrumentals serve as an intricate backdrop for her delicate and soft-spoken vocals." ~ Billboard