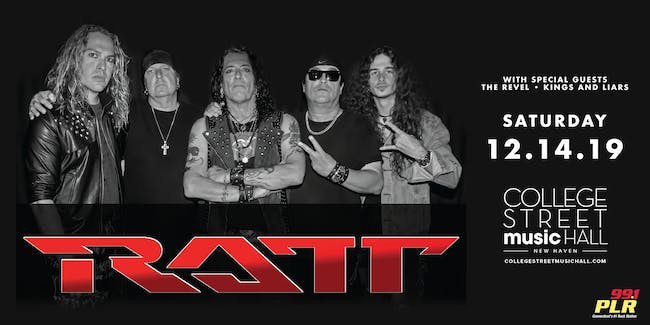 The Revel, Kings and Liars

Pearcy regrouped with friend Robbin Crosby (also from San Diego) then changed the name of his band to RATT. The band rehearsed and played the clubs in and around L.A. for over a year.

They soon recorded and released their own six song E.P. RATT in 1983. Their single, "You Think Your Tough", (Pearcy/Crosby) the song became a staple on local L.A. radio stations KMET and KLOS. RATT EP sold well over 100,000 copies.

RATT was a headliner and selling out local shows. They found themselves opening a show for ZZ Top. The band was called back onstage. RATT was on a roll.

Signed to Atlantic Records in 1984 the band’s debut album "Out of the Cellar" (Warren De Martini, Stephen Pearcy, Bobby Blotzer, Robbin Crosby and Juan Croucier) went over 3x Platinum in 1984 behind the hit single "Round & Round", "Back for More" and "Wanted Man". RATT would tour with Billy Squire and Ozzy Osbourne before going on to headline their own arena tours around the globe. World infestation had begun.

Since 1983 to present the band has sold in excess of (15) million records in the US alone. Their first (4) records went Platinum plus and the arenas concerts were selling out.

They also released the Best of CD Tell the World: The Very Best of Ratt and their 3rd long form DVD, RATT Videos from the Cellar: The Atlantic Years.

This year 2013 Rhino/Warner Music Group recently released RATT "Original Album Series, a (5) album box set with the albums "Out of the Cellar' thru "Detonator" for the rabid RATT fans to have something to sink their teeth into.

RATT signed to RoadRunner/Loud & Proud for 2010 "Infestation". Infestation was a return to form for RATT.

2018 finds RATT continuing to rock the world, performing their mega hits from their storied catalog.

Get ready to RATT and Roll…

Bound to the electric guitar, Dillon and Dean have been dedicated to joining the ranks of those who came before them, and that spirit is expressed in their new EP, The Revel.

With Dean’s voice soaring over the energetic drum, bass and guitars, the message they deliver is loud and clear: Rock ‘n Roll is very much alive.

Raised on classic rock but influenced by the generation they come from, the brothers are quickly gaining a reputation for their musical chops, and their live performance. The D’Antuono brothers are fixated on the future of their band, writing more songs and touring.

The Revel EP, released on June 10th, includes stand out tracks like ‘Come Alive,’ ‘Stuck on You’ and ‘Taking me Down’ and was produced by Jimmy Gnecco (Ours) who also co-wrote and recorded the collection. Legendary record maker Jason Corsaro, and Brett Romnes were also involved. Last up, James Monte mixer and Howie Weinberg did mastering.

Twenty years, three names, one unified source of metal mastery from the Connecticut: Charlie Bellmore, Nick Bellmore, and Chris Beaudette have played all over the world as members of Phantoms, Night Bitch, Toxic Holocaust, Jasta, and playing with Dee Snider on the Billboard Top 20 debut album For the Love of Metal. Now they combine their musical talents with the lyrical lightning of frontman Paul Chasse as Kings and Liars. The band combines the crunch of gritty, underground metal with harmonies and melodies of softer genres without dulling the edge that is carving out their niche as a group that keeps pounding their fans with the kind of music they crave.